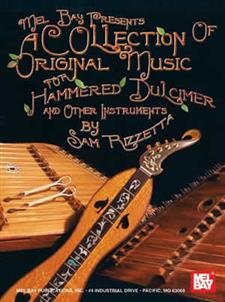 A Collection of Original Music for Hammered Dulcimer & other instruments

NOTE: The current printing, available from Mel Bay, is eBook, only. Our remaining stock is the spiral-bound book, copyrighted 2004.

Historically, music composed specifically for the hammered dulcimer has been rare. Here are 56 Rizzetta original pieces, including reels, waltzes, hornpipes, jigs, rags, blues, boogie, airs, and music for meditation and healing, that explore all the depth, power, versatility, and emotion of this ancient and expressive instrument. The book includes background about the people, places, and events that inspired each composition. While some pieces require a 16/15 chromatic dulcimer, many fit a 12/11. Melody lines are in standard notation with chord symbols. Many have variations with advanced ornamentation; some have alternate arrangements for four octave chromatic dulcimers. In addition to solos, there are six ensemble arrangements, including quartets, which are useful for groups and workshop teachers. While this collection is most appropriate for intermediate and experienced players, advanced beginners will be able to play some of the tunes. The collection includes originals from the Sam Rizzetta CDs Dulcimer Boogie, Saving Trees, Trapezoid, Flowing Waters, Ocean's Edge, Bucks & Does, and Seven Valleys.