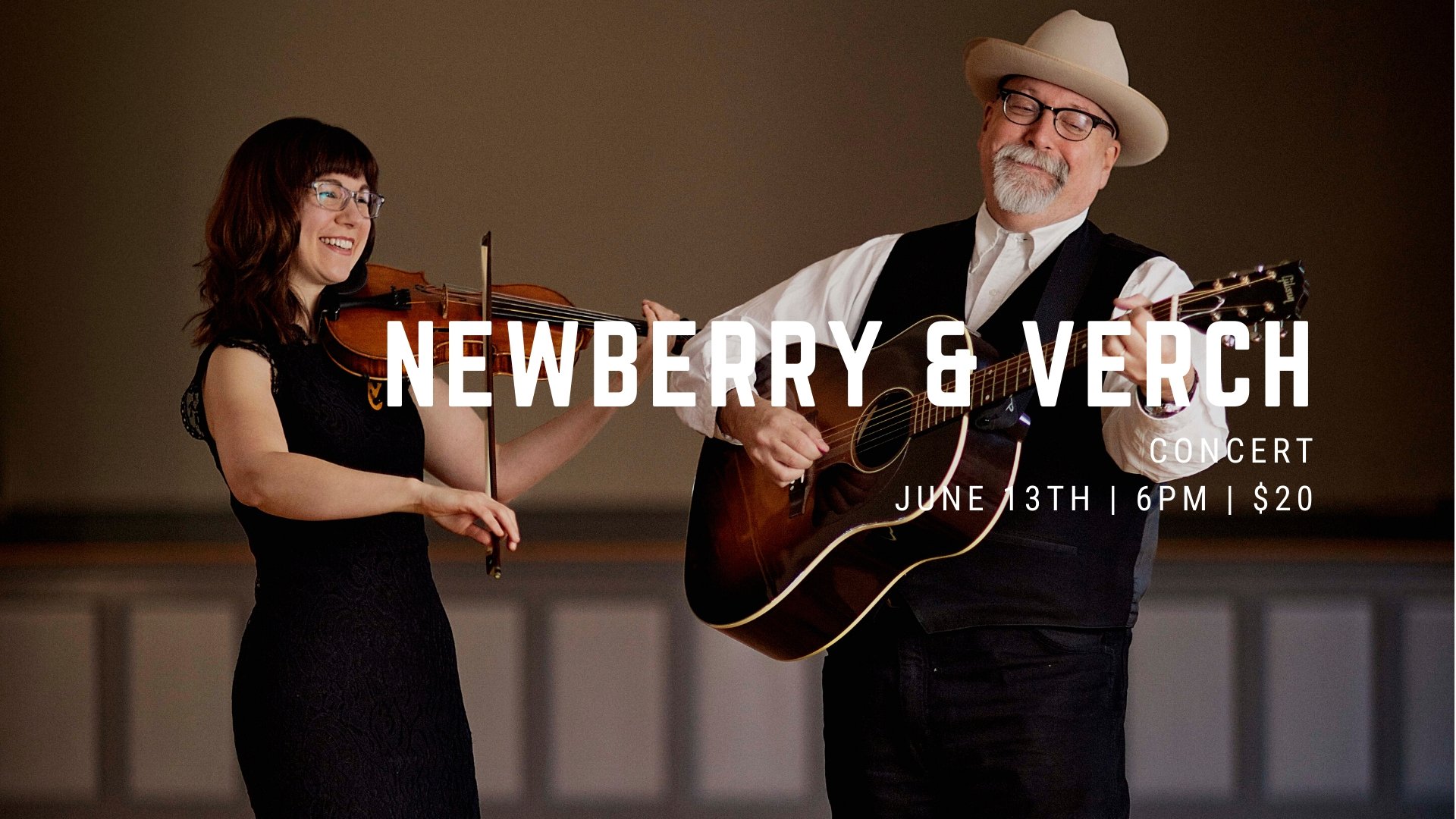 Growing up, Joe Newberry and April Verch absorbed traditions of home and hearth – in his Missouri Ozarks and her Ottawa Valley of Canada. Although they are on the road much of the year, the two musicians are fond of saying that they are rarely homesick, because their music means they always have a bit of home with them wherever they go.

Joe Newberry comes from a family of singers and dancers. He took up the guitar and banjo as a boy and learned fiddle tunes from great Missouri fiddlers. April Verch grew up listening to her Dad’s country band play for dances in the Ottawa Valley. She started step dancing at age three a

nd fiddling at age six.  In a Newberry & Verch show, delighted audiences see first-hand the roots of their music, their love of performing, and their strong musical connection. Original songs join timeless classics. Stories warm the heart, and giveaudiences a chance to understand where the music comes from. Lively fiddle and banjo numbers combine with traditional dance steps toillustrate happy times when people made their own fun.

Known around the world for his clawhammer banjo playing, Newberry is also a powerful guitarist, singer and songwriter. The Gibson Brothers’ version of his song “Singing As We Rise,” featuring guest vocalist Ricky Skaggs, won the 2012 IBMA “Gospel Recorded Performance” Award. With Eric Gibson, he shared the 2013 IBMA “Song of the Year” Award for

“They Called It Music.” A longtime guest on A Prairie Home Companion, he was a featured singer on the Transatlantic Sessions 2016 tour of the U.K., and at the Transatlantic Session’s debut at Merlefest in 2017. In addition to his work with April Verch, he plays in a duo with mandolin icon Mike Compton.  He also plays and teaches at festivals and workshops in North America and abroad.

Before launching her professional career, Verch was the first woman to win both the Canadian Grand Masters and Canadian Open Fiddling Championships. In 2000, she formed “The April Verch Band,” and together they have toured the world, performing in 18 different countries. She has released 12 solo recordings to date, receiving JUNO, Canadian Folk Music and Independent Music nominations and awards for several of those releases. She has also released an instructional stepdance DVD, a book of original fiddle tunes, and a Canadian Fiddle tune teaching method for Mel Bay. Verch was one of 6 fiddlers who represented the Canadian fiddle tradition to the world at the 2010 Olympic Winter Games in Vancouver, as part of a segment called “Fiddle Nation” featured in the Opening Ceremonies.

Ever since Newberry & Verch met, and discovered a musical spark that few can match, they have toured across North America, Europe, and the U.K., including Nova Scotia’s signature festival Celtic Colours International Festival, the Grey Fox Bluegrass Festival in New York state, and Celtic Connections in Glasgow, Scotland.  Their CD, “Going Home,” was released to wide acclaim. Whether it is the power of two voices lifted in harmony, or the sound of traditional tunes calling people to get up and move, these two masters of tradition put on an unforgettable show. And, when their feet kick up the dust in perfect rhythm and those two voices become one, Joe Newberry and April Verch make folks remember why this music existed in the first place.